Monday was Memorial Day, so we enjoyed a long, relaxing weekend!

Tuesday, however, we got right back to work! The universal ribosome binding sites arrived from IDT. We began reaching out to experts for our Human Practices work. Work was started on metabolic pathway modeling and we found five potential universal promoter sequences! Additionally, we began looking into the lung mimic logistics; we contacted Drs. Breur and Kasinski about donating rat lungs from their laboratories to the project and made a spreadsheet of common genera of bacteria in the lung microbiome and the optimal culture conditions for each. At the end of the day, we performed a GFP transformation on E. coli to practice the protocol.

On Wednesday, we had our first Human Practices meeting with Dr. Umberger, the Purdue Polytechnic Associate Dean for Engagement who teaches a class on the FDA regulatory procedures. She discussed with us some considerations we need to make in developing our product, including the unmet need our product would fill and concerns about the product being introduced to other human microbiomes (i.e. the skin and eyes). She also generously offered to introduce us to a contact at Cook Biotech that might be interested in sponsoring our team! Our Experiment campaign was submitted for review; more details on that once it is live! We continued writing up protocols for future assays and working on a code to model the enzyme kinetics and reaction rates.

On Thursday, we did more wet lab work! We performed the miniprep protocol on the GFP-expressing E. coli. In continuing the work from previous days, we researched and wrote up protocols for analyzing enzyme activity and transport assays. We also looked into the populations which are most often exposed to dangerous levels of benzene in order to determine our initial target population. Our project’s modeling script produced graphs for our data, but we were advised during our weekly PI meeting to consider flux balance analysis as a way to model bottlenecks in the pathway. Also at the meeting, we decided to use mammal lung decellularization and recellularization as our lung mimicking method! We are very excited to revive our own lungs in the coming weeks!

Friday, we continued improving upon the modeling code to incorporate changing concentrations and flux balance analysis. We reached out to companies regarding funding, mentorship, discounts, and in-kind donations. In the wet lab, we created a master mix of the gBlock DNA and the primers, poured agar plates, and performed PCR on the six gBlocks we have.

Over the weekend, some team members were dedicated enough to come in and perform a quick gel check on the PCR products. We determined that the results were not as expected, so the next day, the team came back and redid PCR on the six gBlocks with Q5 buffer and performed a gel check. All but gBlock 4 had the expected bands.

Universal Promoter WebLogo Plot: This WebLogo plot, made with Berkeley’s WebLogo application, shows the frequency of amino acids to create sequences of potential universal promoters. Five of the sequences were chosen based on how conserved their -35 to -10 regions are. 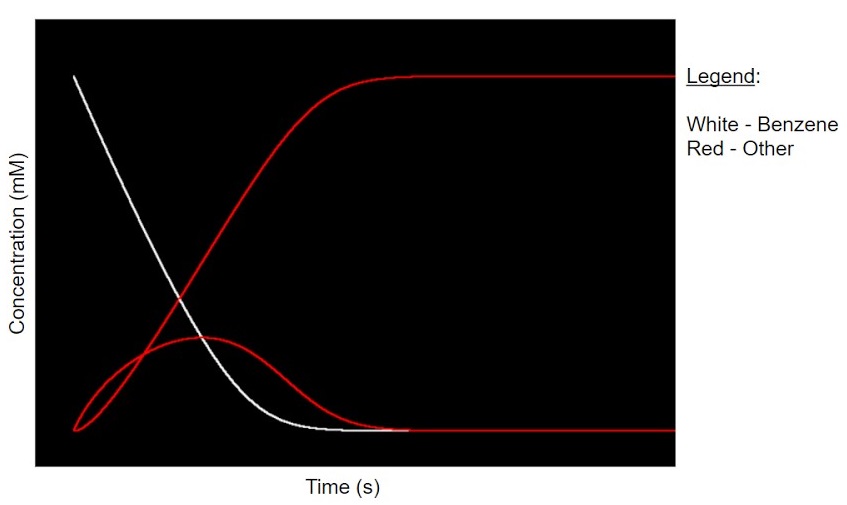 Concentration vs. Time Metabolic Modeling Graph: This is the first graph that was created with our metabolic modeling script. More factors are needed to accurately model the system, but the script is off to a great start!