We began the week by PCR amplifying three of the G blocks which had failed to adequately show up on a gel when we tried amplifying them the first time. Last Friday, we had begun trying to assemble G block 1 and 2 of the Manganese Peroxidase device by using overlap PCR. On Monday, we completed the overlap PCR of Manganese Peroxidase, but it was unsuccessful. After talking to our graduate adviser, Sam Lee, we found out that the annealing temperature we were using was probably too low. We changed the PCR program so that the annealing temperature was based off of the DNA overlap region’s melting temperature. Then, we began applying the new protocol to try and assemble VP1 and VP2 as well as the two AKR devices.

The prototype team also met with Dr. Mosier to discuss the best way to design and build a model bioreactor. We now have a design and a list of parts to order.

On Tuesday, we Nano-dropped the gel extraction we had done last week after overlap PCR amplification of Manganese Peroxidase and realized that it had been successful! We finally had an assembled device. Before we could transform the synthetic DNA into our yeast chassis, though, we needed to run a restriction enzyme digest and ligate the assembled MnP to our plasmid backbone. We completed that and then PCR amplified more G Blocks so that we could perform more Gibson Assembly later on in the week.

Also, the kill switch team transformed their entire assembled device into E. coli, so that the plasmids would replicate.

The Manganese Peroxidase device which had been vector inserted on Tuesday was transformed into E. coli on Wednesday. Although overlap worked for Manganese Peroxidase, it did not work on any of the other G Blocks we tried. Thus, we decided to give overlap PCR a break and return to Gibson Assembly. We used our PCR purified AKR G Blocks from last week to run a Gibson Assembly. Also, since we were almost completely out of several PCR purified G Blocks, we ran a gel of our recent PCR amplified products and then PCR purified the ones which showed single bands at the desired base pair length.

On Thursday morning, the kill switch team purified the plasmids containing their kill switch device from the E. coli. They then Nano-dropped the results to make sure that their DNA concentration was high enough.

The enzyme track performed a Gibson Assembly of Versatile Peroxidase 1 and Versatile Peroxidase 2. We also gel extracted the PCR products of the G Blocks which had shown multiple bands in order to isolate the DNA at the desired base pair length. Finally, we ran a new gel to verify the remaining PCR products and to see if the Gibson Assembly of AKR had worked. The gel showed a faint band at the correct base pair length, so next we will work on ligating the device to our backbone.

We were out of the lab for the entire day on Friday because we were visiting the Cardinal ethanol plant in Union City, Indiana. This visit was part of our Human Practices side of the project and helped give us a better idea of how current industrial ethanol plants work. The facility that we visited takes corn and produces 100 million gallons of ethanol each year. We were able to tour the facility and discuss our questions with the plant manager. 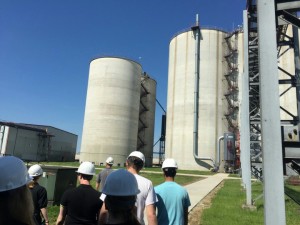 The Purdue Biomakers touring the outside of the Cardinal Ethanol facility.